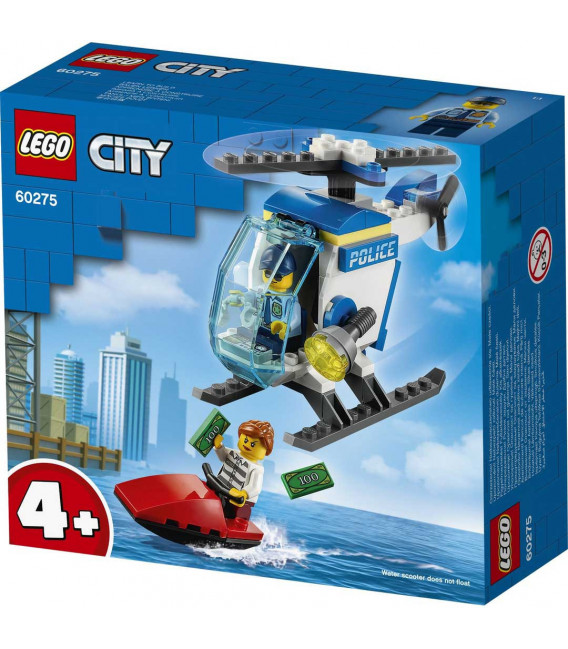 • This easy-to-build Police Helicopter (60275) playset makes a great introduction to the awesome LEGO® City universe, where boys and girls aged 4 and up can immerse themselves in endless creative play. • What's in the box? There's a robust toy police helicopter, crook's water scooter and 2 banknote elements, plus police officer and crook minifigures. Just add a touch of imagination for endless fun! • The police helicopter toy has a minifigure cockpit, spinnable rotors and an opening fuselage for the captured crook. Kids can attach the crook and her stolen banknote elements to the water scooter. • Makes an awesome Christmas, birthday or any-other-day gift for fans of LEGO® City and a great introduction to the LEGO City universe for boys and girls aged 4 and up. • The helicopter measures

Vroom! A crook is making a high-speed escape on her water scooter with a handful of stolen banknotes. Call in the LEGO® City police helicopter and set off in hot pursuit! Help the police officer locate the fleeing crook and swoop down to make a swift arrest. When she's handcuffed and safely on board, fly her direct to the nearest City jail. Another action-packed LEGO City police adventure!